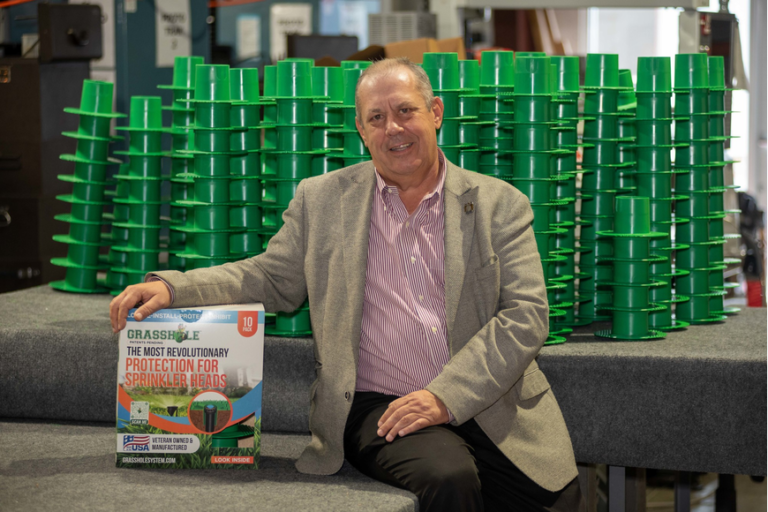 The below article by: Mark Gordon Managing Editor was originally posted on the Bradenton Observer website on June 12, 2021. Original post can be seen here.

After a career as a top financial executive for a variety of organizations, from an air-conditioning company to the Sarasota Opera, Ken Kwiatkowski, 59, recently added something new to his resume: inventor.

His creation? The humorously named Grasshole. It’s a sprinkler head protection system, designed from flexible ABS plastic. Kwiatkowski says it’s a solution to the mostly unseen, yet frustrating and costly issue of sprinkler head damage and alignment issues, which, in turn, lead to grass and yard problems. Kwiatkowski, like many other investors, came up with the idea when he couldn’t find a solution in the marketplace. In his case, it was when he couldn’t find something to protect his own sprinkler heads. “I had some that kept breaking,” says Kwiatkowski, who lives in Bradenton. “I thought I could create a better product.”

He started tinkering in September 2019 with paper prototypes, then made some out of cardboard. He soon moved on to a custom plastic mold manufacturer. After some $50,000 in startup and research costs, the Grasshole debuted in April.

So far, the Grasshole is sold in three Sarasota Ace Hardware stores and online, on grassholesystem.com and Amazon. (A box of 10 Grassholes costs $50 on Kwiatkowski’s website.) Getting to market, Kwiatkowski says, was a whirlwind of obstacles and hiccups. One of the most important lessons he’s learned is to rely on partners for things outside your area of expertise. Patents were one. Package design was another.

‘I’m not your typical bean counter, but this is a totally different direction for me.’ Ken Kwiatkowski, Grasshole

He’s also realized it’s OK to push yourself to something new, no matter the stage of your career. “I’ve not your typical bean counter, but this is a totally different direction for me,” Kwiatkowski says. “This is something out of my comfort zone.”

One element in the jovial Kwiatkowski’s comfort zone? Have some fun with the product. Hence, the name. “The Grasshole name sticks out like a sore thumb,” he says. The quirkiness continues with the Grasshole’s mascot, a cartoon character named Angus, who according to the product’s website, is obsessed with yard care and is a Grasshole. “The Grasshole, like our buddy Angus, works tirelessly to achieve a perfect, green, debris-free lawn area,” the website states. “Anyone whose yard has a lesser appearance is inferior.”

A key Grasshole partner is Bradenton-based Spectrum Custom Molds & Manufacturing. The unique parts of the Grasshole, what Kwiatkowski calls its secret sauce, lies in its ridges and perforations. To get it just right, Kwiatkowski worked for several months with Spectrum owner Mike Guidoboni. (Like Kwiatkowski, a Navy veteran who served in Operation Desert Shield and Operation Desert Storm, Guidoboni is a veteran; he was in the Army.) Guidoboni and the Spectrum team helped refine the product, and Kwiatkowski says keeping it local has been essential for quality control. “If I went to China I would’ve had a lot more trouble,” Kwiatkowski says, not only in quality control, but also in time to market, materials and more.

Another challenge has been the patent process. “I thought I could do that myself but I kept getting it kicked back to me from the U.S. Patent Office,” he says. Mistakes included the font size and total characters of the document. Kwiatkowski went to Doug Cherry, a well-known patent and intellectual property attorney with Shumaker in Sarasota. Cherry and fellow Shumaker attorney Doug Miller worked with Kwiatkowski, and now the Grasshole is in the patent-pending phase.

Kwiatkowski lists multiple other partners and consultants who have helped him — and Angus the Grasshole — get to market. It includes people who helped with the website, packaging design and improving SEO and Amazon presence. His list also includes retired SunTrust banker Bill English, who connected Kwiatkowski with the Sarasota Ace Hardware owner. Getting in Ace, he says, was a big early win. “That shows some credibility, being on those shelves,” he says.

Kwiatkowski has big hopes for the Grasshole, not only in sales but also in possibly landing a licensing partnership. One factor there, he says, is the Grasshole’s design makes it easy to use different colors and even logos, for custom branding. Kwiatkowski is talking with representatives of MyPillow inventor Mike Lindell about getting Grasshole on MyStore.com, an e-commerce platform Lindell recently launched. Kwiatkowski also seeks to connect with St. Petersburg-based product entrepreneur Kevin Harrington for a possible TV commercial. “I’m talking with all the right contacts, talking to all the right people,” he says.

One final big source of help in getting Grasshole to market, says Kwiatkowski, comes from his dad, Stan Kwiatkowski. Also a Navy veteran, Stan Kwiatkowski was in World War II, he was a boxer and later became a chemical engineer. The elder Kwiatkowski died in October 2018, not long before his son began working on the Grasshole. “He always told me to chase my dreams,” Kwiatkowski says. “He was always in my head saying ‘just do it.’”